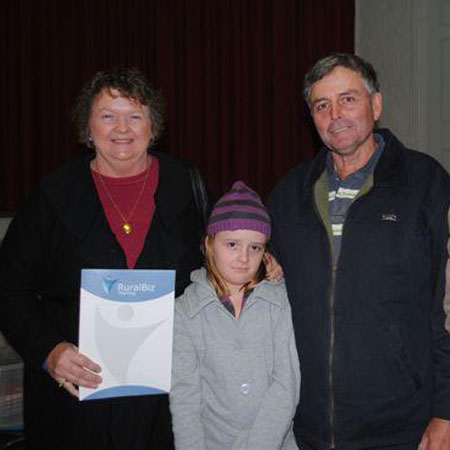 Like many women who marry into farming enterprises, Shirley Kennedy found herself responsible for elements of the business that she had never before experienced and had limited knowledge about.

In 1989 she was thrown into doing the dairy and beef farm’s books whilst raising 6 girls and running the family home. “It was scary to find myself, trained as a nurse, having to keep track of the finances for a business that I wasn’t an owner of” Shirley recalls. The next few years saw massive changes to the Kennedy family business due to external influences such as dairy deregulation, the introduction of GST and the increasing importance of quality assurance programs.

Shirley was forced to move with the times but as the business changed, so too did her areas of responsibility and it became increasingly important that she take on a business management role, that her financial record keeping was fully accountable and that she was able to soundly justify her position to the business partners.

Shirley has found that completing the Diploma of Rural Business Management has given her the knowledge base she needs to complete her tasks with confidence and to be more secure in the role that she has found herself in. “I think this course is fantastic for anyone wanting to professionally manage their rural business” Shirley stated.

Based in Dunbible, near Murwillumbah in Northern NSW, the Kennedy’s family operation will face more challenges in the near future as the present generation ages and younger family members seek to be involved in the business. Shirley believes that knowledge is the key to dealing with these issues as they arise, and she looks forward to undertaking more courses with RuralBiz in the near future to help her stay abreast of the changes to the rural industry.